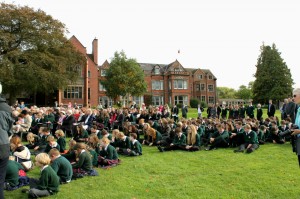 Shinto – An ancient Japanese belief in the bond between man and nature. Shinto is about communicating with nature and giving thanks for the gifts that we receive, such as a glorious morning sunrise presenting us with a new day, or the beautiful blossoms that  adorn the branches of the Japanese Cherry tree in spring.

Following the Shinto service, we were welcomed to continue the celebration with a short concert held in the school chapel. Aisa Ijiri, an award winning pianist from Japan, and Llywelyn ap Myrddin, a globally recognised conductor from Wales, were the stars of the show, performing three exquisite pieces of music.

Myrddin introduced the recital with a brief explanation of the inspiration behind the music; the first piece, Sakura attempts to embody the Japanese Cherry blossom and the way in which the wind swirls the beautiful blossoms around, as if they were snow, blanketing the city of Kieoto during Cherry blossom time. Myrddin likened the music sequence to the art of calligraphy; when one line is practiced over and over until a natural style is achieved. Both of these themes were easily recognisable within the music, as the speed and pitch of the notes varied dramatically and playfully like gusts of wind capturing the blossoms; and the piece repeated the same section several times, linking back to Myrddin’s reference to calligraphy.

The concert concluded with a duet, described by Aisa Ijiri as the interpretation of spring and autumn. She again mentioned the importance of the Cherry tree to the Japanese culture, considering it to be symbolic of the beauty of life, and how, even when the blossoms have fallen, they offer us a memory in which to share how beautiful the blossoms once were. 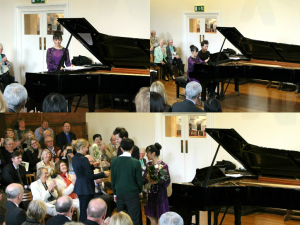 After the performance, Mr.Sederman presented an emotional Mr.Ogura with an engraved, ornamental glass bowl to thank him for his generous donation to the school. The guests were then invited to join the school alumni in afternoon tea; however, this was the end of our day out, as we were needed back in the office. 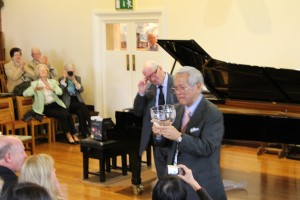 Our team at Ornamental Trees would like to sincerely thank Mr. Sederman and Abbotsholme School for allowing us to share in such a wonderfully insightful celebration of culture and history, and we are incredibly excited to see the Japanese Cherry garden in all its blossoming glory next spring.

Japanese Cherry Blossom trees – We understand that acquiring a Shinto priest for a planting ceremony is not the easiest of tasks, however, we would like to emphasise the significance of choosing a Japanese Cherry Blossom tree for a celebration or memorial. Like Aisa Ijiri described, the beauty of this tree lasts long after the blossoms have fallen, as they are blown all around us; spreading the memory of what the tree once was and giving us something to celebrate when they return the following spring.