The Ginkgo Biloba Tree is a large deciduous species that begins life with a conical shape, becoming more irregular as it matures.

The Ginkgo is a fabulous specimen tree. Best suited to large garden spaces. 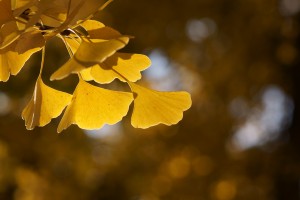 The leaves of the Ginkgo Biloba Tree transform into a warm yellow for a great show of autumn colour.

Planting Tips: Best suited to sunny positions in well-drained soil. Being a tough tree, Ginkgo Biloba will grow well in sheltered or exposed sites and will grow to 10 x 4 metres in 20 years.

Culinary uses: Popular in Asian cuisine, Ginkgo nuts, found inside the seeds are mainly served during weddings or other special occasions.

Ginkgo Biloba Trees have inspired many writers over the years, most famously, the German poet, Johann Wolfgang von Goethe. Who wrote a poem about the Gingko Biloba Tree, published in 1819.

This leaf from a tree in the East,

Has been given to my garden.

It reveals a certain secret,

Which pleases me and thoughtful people.

Is it a living being,

Which has separated in itself?

Or are these two, who chose

To be recognised as one?

Answering this kind of question,

Haven’t I found the proper meaning,

Don’t you feel in my songs,

That I’m one and double? 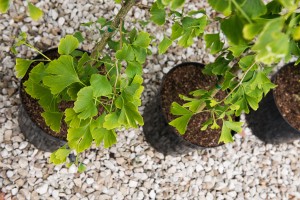 Ginkgo Trees are easily recognised by their two-lobed, fan-shaped leaves.

You can buy Ginkgo Biloba Trees year round from Ornamental Trees Ltd.