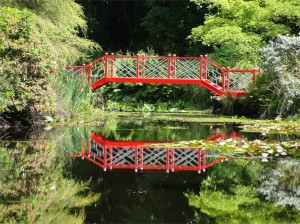 Originally Japanese gardens were intended to express Buddhism and Taosim but during the Heian period (794-1185) the purpose of Japanese gardens shifted to becoming a place for contemplation, amusement and ceremonies as well as being a place with religious meaning.  As with Chinese gardens nature has a huge influence on the design of Japanese gardens. The pine tree is a symbol of longevity in Japanese gardens, the black pine would be used to evoke a maritime scene whilst the red pine was used in more mountainous settings.

Japanese gardens often had tea houses, designed specifically for the spiritual ritual of making tea. The tea house would be located at the end of a meandering path of stepping stones within the garden, sometimes lit with lanterns. The journey was intended to mentally prepare the visitor for the ritual. The tea houses themselves had small doors so that the visitor had to crawl in on hands and knees, this was done as it implied that Samurai Warriors would have to remove their swords to enter.

Shinto gardens
The Shinto or ‘Stroll’ garden was designed so that the visitor would be taken on a route that made the most of the views and vistas. These views were intended to be seen from many different angles. Uneven surfaces are placed in specific spaces to prompt people to look down at particular points.
Karesansui gardens
The Karesansui garden or ‘Dry Landscape’ were influenced by Zen Buddhism and can be found at Zen temples in Japan.  There is no water present in these Japanese Zen gardens, instead there is raked gravel or sand that gives the simulation of water.
Get the look…
Listed below are some trees and shrubs that would compliment a Japanese garden design 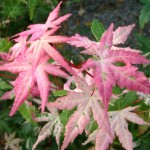 Acer palmatum or Japanese maple tree is a popular choice and rightly so. There are a large selection of maple trees to choose from with differing coloured and shaped leaves reaching from 2 to 4 meters in 20 years.

Phyllostachys or bamboo plant is another great choice for oriental style gardens. Bamboos were used to represent water as when a breeze moved between the canes and leaves the sound made can be likened to a running stream.

Prunus or flowering cherry tree is one of the most famous in Japanese design. Japanese cherry trees are often graceful and ladened with blossom. There is a Japanese plum tree forest called Kairakuen located in Mito, Ibaraki, Japan. It was built relatively recently in the year 1841 by the local lord Tokugawa Nariaki and boasts over 150 different varieties of prunus.